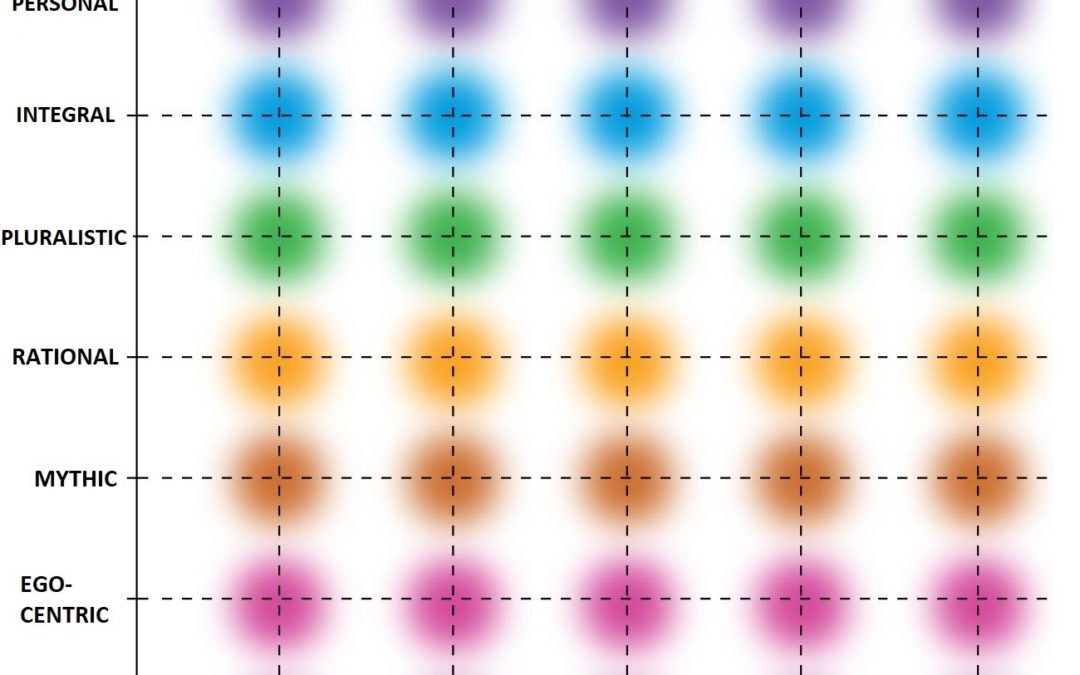 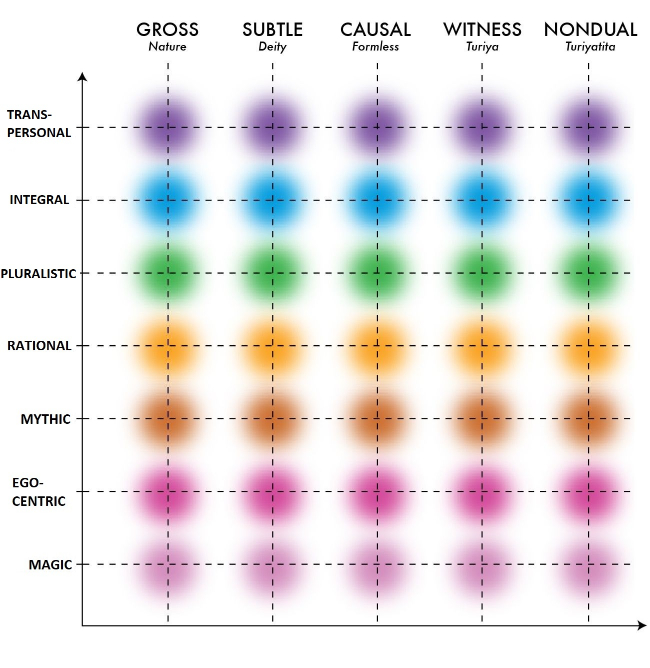 One is called the pure witness, in which we have a direct or immediate experience of everything that arises in our awareness before it is interpreted by the conscious mind. This provides a sense of one-ness in two-ness, as there is still a separate witness that is aware of the direct experience.

The other, the ultimate level of spiritual realization, is called non-dual awareness. It is not a state-stage in itself (because it would create a dual subject-object split), but the totality of emptiness and form that is realized once all two-ness of the layered dualities of the previous state-stages are deconstructed. In other words, non-dual awareness occurs when the witness and that which is witnessed become one, or when oneness experiences itself as emptiness and form.

Another helpful way to look at spiritual state-stage development (or any growth for that matter) is to make a clear distinction between the self and the things that the self is attached to or identified with, such as physical objects, thoughts that create objects in consciousness, or feelings, intuitions, sensations and experiences (including spiritual experiences). This “I,” “subject” or “self” that is identified or attached and doing the seeing, witnessing, or observing is by nature unaware of itself. Once it can be seen, it becomes an object, so who/what is doing the looking? It is you as the subject, self, consciousness, or witness that cannot see itself, just as you cannot look into your own face (without a mirror.)

The initial level of spiritual realization is called the gross/waking (or psychic) state-stage. It marks the major transition from physical to spiritual, that is, the transition from a complete identification with the material world and the physical body, to the spiritual realm. This state-stage emerges with the realization that nothing you have defines you: not the material objects you think of as your possessions (e.g. money, car, home, clothes, jewelry, etc.), not your social status (job, memberships, degrees), nor even your physical body with its needs, impulses, and emotions.

Instead of having knee-jerk reactions to inner habits and other people’s behavior, you increasingly learn how to stay present with them, responding in mindful ways by creating a “space” between impulse and reaction and making a conscious choice.  You become the witness of your physical environment and the master of your body, instead of its slave. This may sound easier than it is, and may require the support of practices such as yoga, conscious breathing,  relaxation techniques, physical exercise, contemplation (such as reading this book), or—in severe cases of pathological attachments—psychotherapy. Just think how often you may consume unconsciously, have a negative emotional reaction to somebody else’s reality, avoid physical exercise, fail to properly nourish your body, or derive your self-worth from the car you drive, the amount of money you have (or don’t have), other material possessions, or the physical appearance or social status of your partner.

The awareness of “I have a body—but I am not my body,” with the ability to observe and use it, instead of being used by it (often through addictive behavior),  is very liberating. People who enter this state-stage of spiritual realization may start to have psychic,  synchronistic,  or mystical experiences in nature,  and have a clear sense of awakening to a different reality. They realize that the physical and emotional pains of the body may be inevitable, but that suffering is optional. As the body becomes the object of the subject, more compassion for the self and others emerges.

The feminine in this state-stage tends to move consciously into the body (descend) and the manifest world. This downward movement gave rise to earth-bound and Goddess-worshipping religions such as paganism. The masculine tends to move away from the body (ascend) and deny its pleasures, as seen in male God-worshipping religions such as Christianity, Hinduism, and Islam, or Buddhism (which has no God),in their traditional forms.

The subtle dream state-stage is entered by grace or emerges through a daily spiritual practice such as meditation or contemplative prayer. It emerges with the realization that you are not your thoughts and beliefs. Similar to awakening from a dream after sleeping, you realize that random and unobserved thoughts (assumptions, projections, prejudices, etc.), which are frequently fed by pain from the past and fear of the future, are just as unreal as your dreams at night. These thoughts can play in your head like a radio station that repeats the good old “coulda, shoulda, woulda” blues over and over. If this is the case, you are essentially just one step away from an insane person who talks out loud while walking down the street. This self-talk may then trigger negative emotions, which in turn feed more paranoid thoughts that can become a cause for depression  and other pathologies. People who enter the subtle state-stage awaken from this nightmare or cognitive prison, and learn to recognize their random thoughts as unreal objects in consciousness. They can then either turn down the volume (quiet the mind), push the Off button, change the radio station from KFUCK to KLOVE (positive thinking), or simply observe their thoughts and allow them to move freely, similar to breezes blowing through the branches of a tree without the tree being affected by them.

Advanced forms of insight meditation, such as Vipassana, that focus on the breath, or the reciting of mantras, are practices that can support individuals in their ability to observe, quiet, and focus their mind. They can then use their mind as a tool for visualizations, introspection, contemplation, creativity, and critical thinking, instead of being used by it. With the realization that “I have thoughts, but I am not my thoughts,”  individuals may start to dream lucidly,  have experiences of subtle illuminations, or experience a deep love for all creation. Some people become “experience junkies” and move from one spiritual event, class, workshop, journey, or practice to the next, without ever being able to make these states into a permanently present or accessible stage.

In an effort to enter this state-stage through observing and quieting the mind, the masculine tends towards repressing and dissociating from emotions and the conditioned self, while the feminine tends to strengthen the self and connects more deeply with feelings and the heart.

The causal formless state is likened to deep dreamless sleep. It is a timeless openness or emptiness that is usually entered during deep meditation and therefore sometimes called “The Vertical Drop.” In Zen, this is called “Satori,” “Radical Emptiness,” or “the Cloud of Unknowing.” Along with it comes the realization that you are not your experiences or feelings (present, happy, sad, surrendered, afraid, content, awake, peaceful, connected, boundless, etc.), that underlie and feed much of your thinking and discernments, nor your intuitions or intentions. In this state-stage, any identification with the physical world, objects in consciousness, and other experiences disappear.

It is often likened to emptiness, except that it is not a mere blank, but an utter fullness of Being or Godhead that enters the space as light. It feels so full that no other manifestation can contain it. Lucid dreaming becomes more regular and there is a clear sense of “I have experiences but I am not my experiences.” Just as with deep dreamless sleep, most people “return” or “fall back” to one of the previous state-stages after having had a taste of the causal realm.

The pure witness state-stage is entered when the (separate) observer or awareness that entered the timeless emptiness of the causal state-stage goes one step further and the experience and the experiencer become one. We may call this direct or immediate experience or “One Taste,” when perceiving and acting, and thus “being” appears before thought.

A sense of “I witness Being but I am not Being” emerges. The witnessing state becomes a state-stage when you can access complete non-attachment or non-desire by choice, similar to accessing language, walking, playing a musical instrument, or other creative activity without having to think about it (being in the flow), and retain a subtle awareness during dreamless sleep.

The latest neuroscientific findings explain this state as follows: there is a constant “bottom-up” stream of sensory input to our brain. Through complex processes, most inputs are filtered and modified in the limbic system before the “data” is delivered to our conscious mind, located in the neocortex. From there, a “top-down” process determines if the sensory input is a familiar or novel event. If it seems familiar, the conscious mind “assumes” that it is “same old same-old” from previous experiences that are stored in memory and does not pay much or any attention to it—been there, done that. If it is novel—a new sight, sound, smells, taste, or touch—the mind focuses much more attention on it and then decides how to react or respond to it.

In the pure witness state-stage, more “bottom-up” data is delivered (we have heightened awareness, such as when we are in love, or take certain drugs, or travel to a foreign country), and the “top-down” process is diminished, so that everything is perceived directly or immediately with a wondrous “beginner’s mind.” Because our perception of reality is in our mind, perception, and the perceived becomes “one” in the pure witness stage.

This state-stage is often confused with the preverbal a-dual or fused state that babies or animals are in. However, they are not witnessing, experiencing or reflecting on their environment, but are embedded in it and react to it in an instinctual or reflexive way. A good example is the mirror experiment. Babies and animals don’t realize that the mirror reflects the environment. They see the reflection as part of their surroundings and their self-image as another being, while a person in the pure witness state-stage is aware of the reflective quality and can distinguish it from the background.

In this state-stage, the feminine/masculine duality is fully transcended.

As mentioned above, non-dual awareness is not as much a state-stage in itself, as it is a full embrace or embodiment of all the previous state-stages and can only be pointed to. In the preceding witnessing state-stage, one can become completely absorbed in direct experience and “The Now,” and thus become oblivious to inter-subjectivity and inter-objectivity. In non-duality, both are integrated: emptiness manifests as form, and form as emptiness, and both evolve in time through inter-becoming. In this state, there is no separate self or witness that would experience time, form, emptiness, or even enlightenment (who would be there to be enlightened?) as separate from itself.

Non-dual awareness cannot be experienced, since all experiences (including the witnessing state) come and go and require a separate witness who has the experience. It also cannot be contained in words. As soon as you talk or think about “it,” it would become separate from “you” and therefore dual.

Non-duality has been described as reaching the top of a pole and then climbing one step further. What follows is a complete emptying of the subject (climber) into the object (world), so that there is no more subject (observer/witness)–object duality at all. It is devoid of any looking out on the world from any vantage point that is apart from it. You are then the world's perspective or one with Godhead (sorry, you are still not an all-knowing or encompassing God or Goddess—this notion would be a psychotic  delusion that many New Age narcissists have fallen into.)

Non-Duality also heralds a return to balancing and harmonizing masculine and feminine polarities, but in an ungendered way. Individual humans are obviously never “one” on the physical level (one is either male or female),  and can’t be feminine or masculine at the same time (you can’t breathe in and out simultaneously), but we can find wholeness on the physical and psychic level during transcendental sexual union and during Transcendental co-creation.