What motivates monogamy and non-monogamy at "Integral" and higher stages? 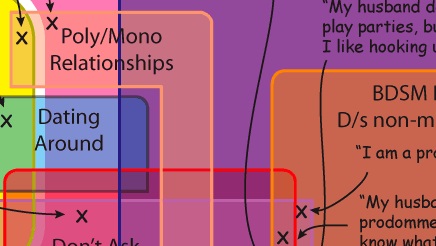 After my friend Bill McCart took a look at The 12 Core Values for Integral Relationship Evolutionaries he pointed out that the last one, “We engage in sacred/tantric sexuality and practice monogamy out of choice instead of fear” implies that all people at an Integral or higher level would choose to be monogamous. He wondered if this could be so, as each stage of consciousness development seems to have produced its own forms of monogamy and non-monogamy.

At archaic “Infrared” and magical “Magenta” stages, which are centered around basic survival needs and family clans, the lines between monogamy and non-monogamy seem to be blurred and somewhat unclear. High status males may have multiple “wives” who are forced to be faithful and harshly punished when committing adultery. Lower status males may only have one wife and be monogamous, have to resort to forms of rape, or be without a partner. We may also see the rare form of polyandry at these two stages.

At the egocentric “Red” stage, monogamy may often be practiced out of fear of punishment from a partner or tribe/gang/cult. Non-monogamy (outside of polygamy and the rare cases of polyandry) takes on the form of cheating without any considerations for later consequences (STD’s, pregnancy, emotional harm, marginalization etc.)

At the mythic “Amber” stage, monogamy becomes informed and enforced by religious beliefs and moral laws that establish and protect the nuclear family and stabilize societies by giving every man a fair chance to find a wife (widespread polygamy necessarily leaves many men without a partner) and providing for women and children. Marriages are “until death do us apart”. Non-monogamy (outside polygamy, which fades away at Amber) takes on the form of cheating, having mistresses, and visiting prostitutes. If done by men in secrecy, it is often silently tolerated or even condoned by society. Non-monogamy by women is condemned by society.

At the rational “Orange” stage, gender plays less of a role when it comes to sexual behavior, and monogamy becomes a practical choice for men and women in their pursuit of the good life of material abundance and personal liberty. Non-monogamy still includes cheating, but also takes on accepted forms of open “don’t ask don’t tell” relationships, swinging, casual sex, sex parties, the cougar movement, escorts, sex tourism, adult clubs, etc. (what happens in Vegas stays in Vegas).

The image below, which I found on the Internet, depicts most current forms of non-monogamy in a tongue in cheek way. At the pluralistic “Green” stage, relationships shift toward self-fulfillment and gender roles become more blurred and sometimes even get reversed. Monogamy and celibacy may be chosen as a spiritual practice and for psychological healing. Non-monogamy takes on the form of polyamory, which means “many loves.” In their purest form, poly relationships provide alternatives to the primarily sexually motivated non-monogamy options of Orange (if Orange truly falls in love with another partner they usually separate/divorce) and the social stigma of Amber (where divorce is often not an option) by openly loving and being sexual with more than one partner.

Polyamory becomes chaotic and painful when Red (which Green cannot distinguish from itself and does not want to marginalize or exclude) enters the poly scene and violates the various ethics, agreements, rules, and processes of genuine polyamory under the guise of being “poly”, while it is merely a justification for cheating and taking advantage of their partner(s), who then experience it as “polyagony”. Even though polyamory is theoretically gender unbiased, there are usually more men with multiple partners than women, and I often found that men are happily poly until their partners take on lovers as well.

Now my question is:
What motivates monogamy, non-monogamy (or celibacy) at “Integral” and higher stages? What forms does it take? What role does gender, age, hormones, status and access (to partners) play?
I noticed that most men at Integral and higher levels (including me) prefer long-term monogamous relationships and marriages, maybe to counter our previous promiscuity and serial monogamy in Orange and Green (see for example Robert Augustus Masters’ ideas about Mature or Awakened Monogamy, or David Deida who “strongly recommends monogamy for most people including himself” on his website). I also observed that Integral women may be less interested in such exclusive and long-term arrangements and desire more sexual freedom and less commitment, which challenges some Integral men. This dynamic may also be related to lowered testosterone levels in middle-aged males and hormonal changes in females.

I admit that Core Value #12 may be more my wishful thinking than a reality. My thought was that Integral couples would be more interested in healing, learning and growing together to serve a higher authentic evolutionary purpose as a couple, than to seek sexual variety and experiences, but I may be wrong.

As I already hinted at above, there is a twist to all forms of non-monogamy that I find quite significant, but that is often overlooked.
Most first-tier non-monogamous relationships, including polyamory, are composed of attractive (tall), high-status/high earning, potent males (and/or sensitive New-Age men with lots of free time on their hands) who have multiple female lovers who are typically monogamous with them. This creates a challenge for less attractive and busy males to find a female lover and partner, as the women rather share a man who they find highly rewarding than to settle for a less attractive mate. For sake of argument, assume that 10% of highly attractive males would have 5 exclusive lovers each. This would leave 50% of men single, frustrated and in potentially harmful competition.