Why to be in a love relationship 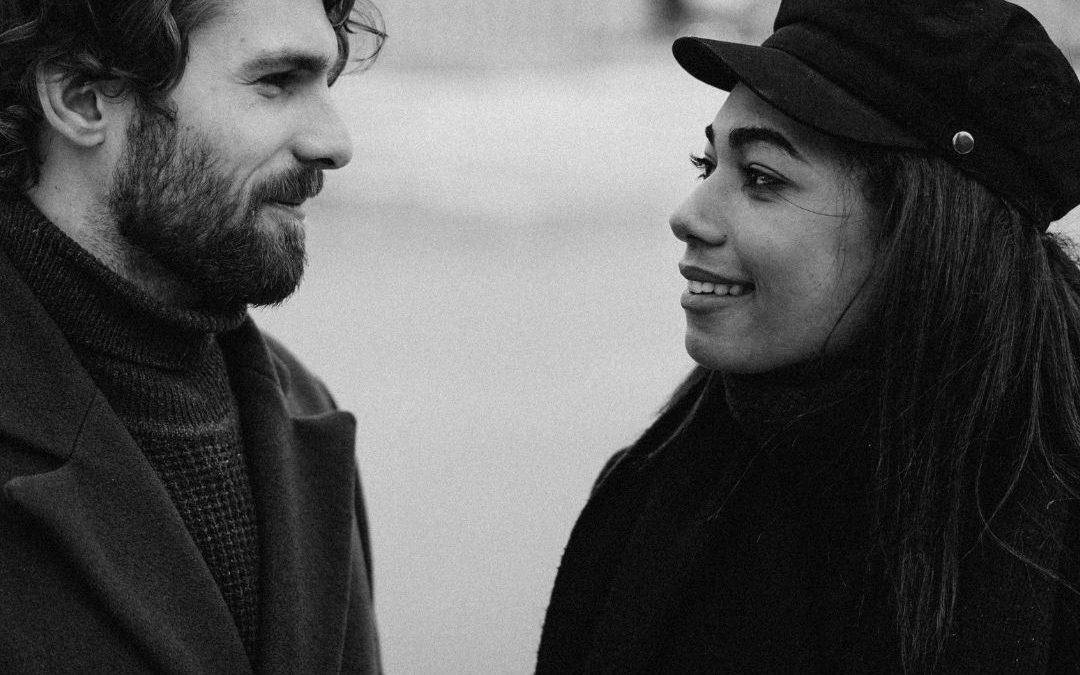 After 10 years of rigorous scientific research, the German religious scholar Dr. Michael Blume documented a clear connection between mythic conservative religions and higher fertility rates. He called it "preach and breed" in his (German) book Religion and Demografie. We also see that religiously unaffiliated people (and Buddhists) reproduce far below replacement levels in a 2015 Pew Publication (and things gotten worse since then in many countries e.g. South Korea 0.864, Italy 1.270 births per woman.)

Image above: Religion and fertility from PEW Research

As I argued before, this not only leads to over-aging and shrinking modern and postmodern societies with all its negative effects, but also to a downward shift of overall consciousness (or Center of Gravity) towards the mythic stage around the world. 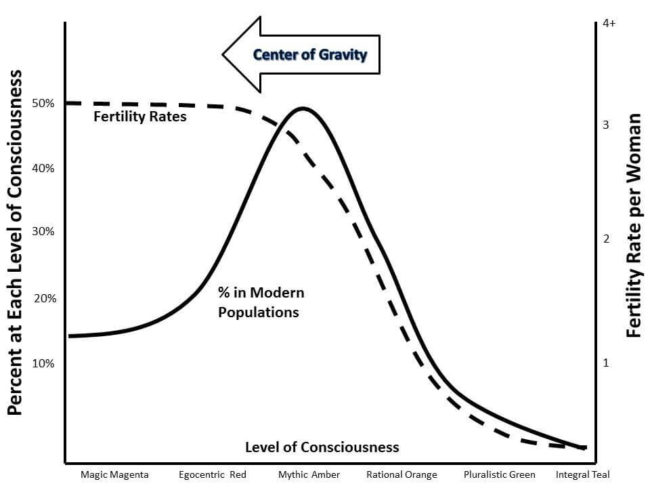 Image above: Fertility and shift of consciousness towards mythic stage

This not only has negative effects on climate change but also leads to national (e.g. Jan. 6. attack on the US Capitol) and international unrest and conflicts (e.g. Afghanistan war).

Mark Haas, a political scientist at Duquesne University, argues in a recent New York Times article about Trumpism Without Borders that "aging will create powerful forces for international peace on the one hand and increased domestic polarization on the other."

He explained: "Countries with large numbers of young people (ages 15 to 24) as a percentage of the total adult population ("youth bulges") are more likely to engage in international hostilities than ones with older populations. With a surplus of military-aged citizens, soldiers are cheaper and easier to recruit and replace. Younger populations are also more easily radicalized, especially when the country is poorer with fewer economic opportunities.The reverse dynamics occur in older societies. Aging tends to reduce both states' capacity and willingness to go to war. As societies age, governments are likely to dedicate an increasing percentage of their budgets to spending on elderly welfare, which is likely to reduce expenditures in all other areas, including on the military."

A solution to this problem is that we educate and support young people at all levels of consciousness development to co-create healthy love relationships and, if they so choose, to have children. 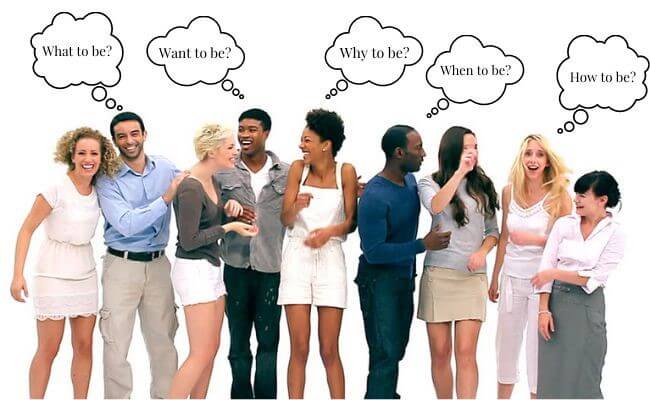 How to be in a love relationship in the 21st Century:
It is obvious that the old mythic relationship paradigms with women in the domestic and men in the public sphere no longer work at a modern and postmodern level of development.

A relational version of Ken Wilber's integral model gives us 14 necessary or essential skills and practices for the co-creation of healthy love relationships that we explore in our online trainings and live workshops (and upcoming newsletters). They provide singles, couples, helping professionals (therapists, coaches, teachers, etc.), and group facilitators with the necessary tools to:

1. Co-create a healthy love relationship in all four dimensions of their being as the foundation of a healthy love relationship (covered in this newsletter.)
2. Identify levels of consciousness development and how to learn, heal, and grow together with an equal and opposite partner.
3. Communicate with their partner at his or her level of consciousness so that they are both heard and understood and get their needs met.
4. Understand biological and gender differences to avoid going down the infamous Fear-Shame spiral and to return to love.
5. Balance and harmonize healthy feminine and masculine polarities to create synergy and sexual passion.
6. Awaken together through the five state-stages of spiritual development.
7. Co-create a healthy and rewarding sex-life by healing and growing towards sacred and tantric sexuality.
8. Understand their Anima-Animus complex so that they can co-create a healthy love relationships at stage three or five.
9. Become aware of personality types to understand the essential needs, preferences, and qualities of themselves and their partner.
10. Move towards earned secure attachment through practice and creating a coherent narrative.
11. Own their emotional reactions to heal five forms of the unconscious instead of blaming their partner.
12. Create compassion and healthy boundaries when they feel attracted to, or are in love with, a complex partner who is highly seductive and challenging because of a personality disorder.
13. Understand their biological, transformational, and transcendental purpose that makes the world a better place and how to identify a soulmate who shares their respective purpose.
14. Co-create a deeply rewarding love relationship with their soulmate through intimacy, passion, and commitment in all four dimensions of their being at the level of all seven chakras by balancing and harmonizing healthy feminine and masculine polarities. 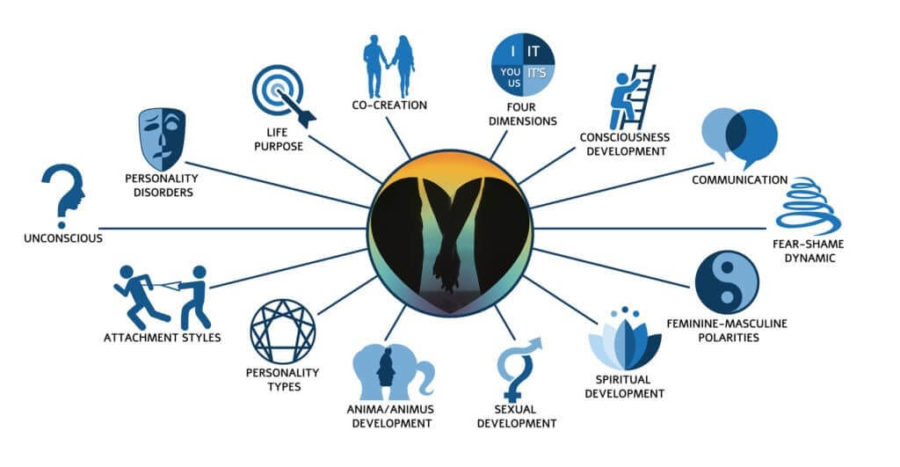 Image above: The 14 essential elements of an Integral Relationship

The exploration of the 14 elements leads us to the image below in which equal and opposite partners realize their fullest human potentials through ongoing learning, healing, growing, and awakening in the four dimensions of their being by balancing and harmonizing healthy feminine and masculine polarities and sharing their biological, transformational, and transcendental purpose at the level of all seven chakras to make the world a better place through co-creating more goodness, truth, beauty, and functioning. 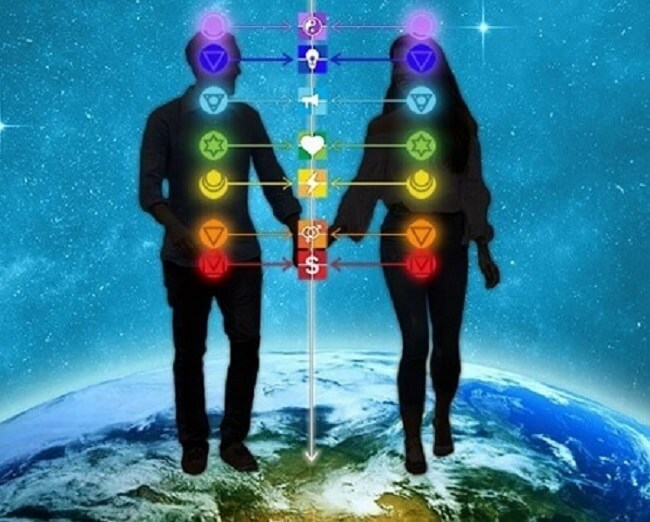 Image above: Couple co-creating at the level of all seven chakras

If you are not in a healthy, happy love relationship and can't join our new training and/or workshop below, you may book individual sessions with me at https://integralrelationship.com/consultation/. 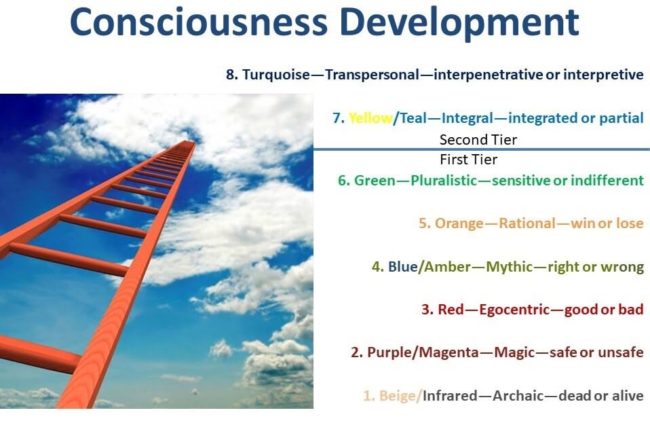 When the limits of integration at the third Egocentric rung are reached by hitting the side-rails of the ladder, transformation to the Mythic level of rules, roles, law, and order can take place. Once this level is developed, growth to the Rational level of scientific true and false, and social win or lose becomes possible. As the self evolves, basic capacities are included (retained), and limited views are transcended. This never works in a perfect way, as illustrated below. 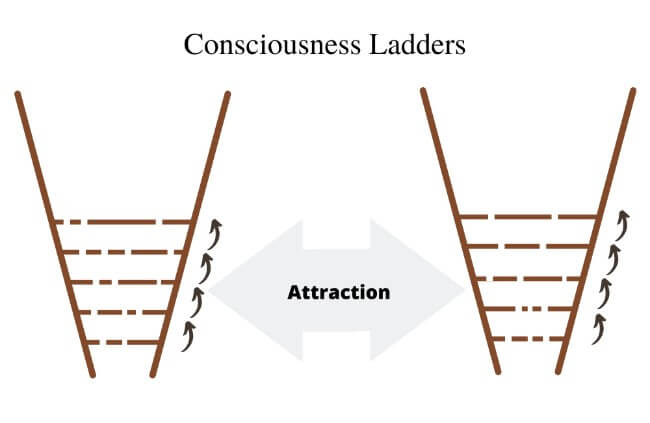 Image above: Consciousness ladders and attraction

The holes or missing parts of each rung represent undeveloped or repressed capacities. These are then projected onto a complementary partner who developed and integrated these parts and who we feel strangely attracted to, as he or she "completes" us.

To find out which rungs of the developmental ladder you and your partner/date have reached and integrated and what holes you project, you may share with him or her in an autobiographical way if and how you grew through the fourth and fifth stages below.

How did your views and life change in each of the four dimensions of your being as you evolved? What was transcended (limited views), what was included (basic capacities)? How does each stage impact your love relationships today? What attracts you to your/a partner? What needs do you project onto your/a partner? When do you regress (in relationships) and become defensive (fight, flight, freeze)? What do you want to co-create at each of the three levels?

Dogmatic. Find meaning, hope, and purpose in life through affiliation with a higher authority. Sacrifice self for the one true way. Bring order and stability and be loyal to receive future recognition and reward. Honor the recent past and consider future generation. Control impulsivity through guilt. Enforce strict mythic morals, rules, and principles of rightful living. Master plan puts people in proper places. Clearly defined gender roles (Men are from Mars, Women from Venus). Patriarchal and sometimes matrifocal (women head of household).

As Couple: We need each other to fulfill our gender roles as husband and wife, and to start a family.

Materialistic. Objective, democratic, humanistic. Pursuit of life, liberty, and happiness. Ends slavery and repression. Strive for autonomy and adapt to constant change. Equal rights and responsibilities for all (including women/liberal feminism). Knowledge is power. Seek out the good life and abundance. Progress through the best solutions. Enhance living for many through technology and wealth. Play to win and enjoy competition. Learn through tried-and-true experiences.

As Couple: We need each other to increase our status, further our careers, support our success, and to enjoy our lives to the fullest.