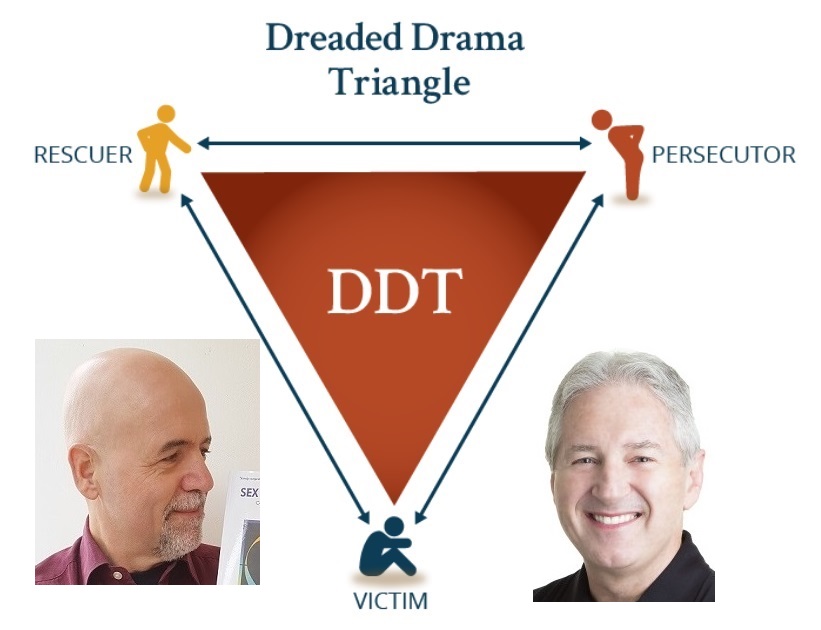 Here is the link to the slides of our conversation: https://integralrelationship.com/wp-content/uploads/Dr_Bert_Parlee_RELATIONSHIPS_May_2018.pdf.
The Brene Brown video that Bert wanted to share is at https://www.youtube.com/watch?v=V2LXnTQh-3s

Below is an image from http://powerofted.com/the-drama-triangle/ by David Emerald that Bert talked about.
Bert also mentioned the work of Barry Johnson about Polarity Management: Identifying and Managing Unsolvable Problems at http://www.polaritypartnerships.com/

The Power “OFF” Switch — Learned Helplessness in Drama Triangles

A focus on problems and complaints creates drama. The Victim-Rescuer-Persecutor Drama Triangle (Karpman, 1968; Emerald, 2016) is a powerful approach to make sense of the limiting and destructive patterns that negatively impact individual and team dynamics. Each position or role in the triangle has a unique story with readily identifiable characters and characteristics.

As with “Suffering Stories”, actors in the drama triangle undermine individual and team performance in the process. Like “Suffering Stories” actors in the drama entanglement see things from their own perspective. One person may see themselves as a Victim while the identified Persecutor in turn feels victimized by this accusation. With awareness of these familiar roles and stories, it’s possible for individuals and teams to empower themselves to break the vicious and destructive cycle of negativity. At that point, the negative energy experienced in the vicious cycles can be re-purposed to more powerfully create virtuous and positively reinforcing cycles.

The identities of disempowering stories in a drama triangle are as follows:

The Victim
VICTIM – “Poor Me”

“Always” and “never” are often parts of disempowering Victim language and experience. Lots of time can be wasted talking about their problems, unfairness, bad luck, oppressive circumstances, and how they have been hurt. Suffering is the Victim’s identity — things are never right and there is never enough (time, support, resources, etc.). There is always a need for something more or for someone to come (or to go) before the situation can change. When something good happens, the Victim says, “It never lasts…something always ruins it …” Victim stories can wear down resilience and drain energy.

The Rescuer
RESCUER – “I’ll Help You”

Having all the answers and knowing the right solutions may not sound like a bad thing. However, Rescuers tend to see themselves as heroes. In contrast, they may be seen by others more like party crashers taking responsibility for what’s not theirs. Rescuers need to be needed, admired, and depended upon. They require a Victim to save from the Persecutor/s. Their greatest fear is that they will no longer be needed.

The Persecutor
PERSECUTOR – “It’s All Your Fault”

The Persecutor punishes others for what they perceive as bad or wrong behavior. This can then manifest as bad or destructive behavior of their own. However the Persecutor tends to see themselves as having high standards rather than being destructive. Persecutors can feel like Victims when others challenge their behavior, and Victims and Rescuers can easily slip into the Persecutor role when they express their anger, criticism, and resentment. More than anything, the Persecutor fears becoming a victim. Trying to maintain a position of power over the Victim ensures safety, at least in the Persecutor’s own mind.

Breaking The Cycle – Taking Responsibility to Create Norms and Perform
The roles of the drama triangle often become habits, or well-worn ruts in the stories we tell. The longer and more severely these unhealthy cycles play out, the greater the stress, blame, and amount of wasted time and energy. Drama Triangles are living proof for Richard Bach’s insight, “Argue for your limitations and sure enough they’re yours.” Naming the fact that a drama triangle is in process can be a good first step toward an empowerment shift, and the creation of a more effective story.

Identifying the patterns in a drama triangle enables awareness and choice. We all have choices about whether or not to engage in destructive drama dynamics. Asking about the intention (“what do you want?”) and choice (“what actions can you take that align with that intention?”) are potent ways to reclaim power, and shift to a more productive and empowering position. Though you can’t choose for others, shifting your own story can also contribute to making a similar shift available for others. However, the habit of focusing on what’s wrong and who to blame for our discomfort can be a difficult one to break.

The Power “ON” Switch — Learned Optimism in The Empowerment Dynamic
Early Questions ask:

One key to getting out of the drama triangle is to shift from external referencing–the unhealthy and even dangerous pattern of looking outside of ourselves for approval, answers, solutions, love, identity and happiness. On the other hand, enthusiastically inviting feedback is a valuable reality-testing tool to ensure we’re not telling ourselves and other people stories that don’t merit shared perspective. Empowerment involves independent initiative AND welcoming information from others about our efforts. (Drama roles are all about self-stories that justify the drama while remaining immune from disconfirming data). By starting with an internal reference and developing adequate internal authority and self-efficacy requires a person (or team) to be willing to look internally and to stay fully engaged and present. Speaking truth without blame or judgment is a first step as a Challenger (no longer a Persecutor) who is seeking to create a different and more empowering dynamic.

This involves an ongoing reframing of perspectives, which is a process requiring both courage and vulnerability. There must be a willingness to own imperfection, acknowledge and forgive mistakes, to hold onto one’s vision, and to make requests and commitments toward goals. Ongoingly. Adopting creative measures to hold individuals and the team accountable for improvement demonstrates genuine resolve to anchor new intentional behaviors and change that benefits all involved.

– David Emerald
From Victim to Creator — is the central role in TED* (*The Empowerment Dynamic), which taps into an inner state of passion. The role of Creator is the empowered alternative to the drama triangle role of Victim. Directed by intention, a Creator is focused on a desired outcome, propelling the person who has previously identified as Victim to take Baby Steps toward what they want to create. A Creator also takes ownership of their ability to choose responses to life circumstances.

From Persecutor to Challenger — is focused on learning and growth, holding a Creator accountable while encouraging learning, action, and next steps. The role of Challenger is the empowered alternative to the drama triangle role of Persecutor. A Challenger intentionally builds others up, as a positive alternative to putting someone down by criticizing, blaming, or controlling. They challenge others by encouraging them to stretch, believing in their potential, inviting more and better. Challengers provoke and evoke learning and growth.

From Rescuer to Coach — uses compassion and questions to help a Creator develop a vision and action plan. The role of coach is the empowered alternative to the drama triangle role of Rescuer. A Coach provides encouragement and support, in place of “rescuing” actions. Rather than doing it for the other, the Coach encourages-“I believe in you” and inquires- “How will you do it?”

Individuals and the team must believe the choice is there, and that new thoughts and actions will contribute to creating a new reality. The move from feeling powerless and blaming to focusing on what’s wanted and possible are powerful and positive first steps. While this shift in perception can move a leader and team from drama to empowerment, it requires courage to be vulnerable and to interrupt the habits of thinking and acting that animates the drama story.