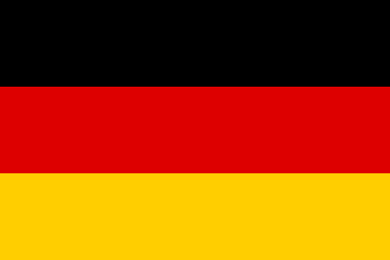 Seeing a reality in our romantic relationships is one thing, getting emotionally triggered and hung up on it is another. I recently realized that I had a huge cultural shadow that took me eight years, including writing Integral Relationships: A Manual for Men, to see and transcend.

As you may know, I grew up in West Germany and moved to Northern California with my (then) wife and our two daughters in 1995.   My wife was pregnant at the time with our third daughter.   When we applied for health insurance–a no-brainer in Germany and most other industrialized countries–she was declined because of her “pre-existing condition” (being pregnant that is).   I had never heard of such a thing in my life and was dumbfounded.   Years later we also learned how expensive it is in the US to send kids to college–which is still mostly free in Germany.   Actually the German government pays children of low income families to go to school (see http://en.wikipedia.org/wiki/Student_loans_in_Germany).   German parents also receive approx. $300 “Kindergeld” per month for each child under 19/25 (see www.howtogermany.com/pages/kindergeld.html) and of course ALL children are automatically enrolled in the “free” single payer health care system at no extra cost to their parents.

Now don’t get me wrong; I live in the US by choice, I am grateful to be here, and recently became a US citizen.   What I did not see for the longest time, because of my cultural conditioning, was why most American women are so obsessed with finding boyfriends and husbands with social status and wealth.  If American women want to have children, they have to, because it can cost up to one million dollars per child to raise them through college, while it is much less in other countries.

This cultural/social difference raises the financial bar for American men who want to be with an attractive woman, including those who don’t want to have children.   On the other hand, with the ongoing upward distribution of wealth (seehttp://motherjones.com/politics/2011/02/income-inequality-in-america-chart-graph) and the increasing incomes of women (young childless single women now earn more on average than childless single men), it becomes harder and harder for women to find men that they can marry up to (see www.time.com/time/specials/packages/article/0,28804,1930277_1930145_1930309-2,00.html).

The following diagram (originally by Donald Symons and adopted by Warren Farrell) illustrates this dynamic:
On the horizontal X axis you find the increasing attractiveness of men (dashed line) based on their income/wealth and that of women (dotted line) based on their physical attractiveness.  On the vertical Y axis you find the number of males and females at each horizontal level.

While the US median income in 2006 for people age 25 and older was $32,140 (with only 5.2% of single men making more than $75K), most attractive women (of which there is a high number) desire men who make $75K – 150K or more.  This leads to the dynamic that many men with average incomes (see the bump in the center of the graphic) look at sexually attractive women (see the bump in the right side of the graphic) whom they can’t afford, while these women look for men with high incomes and social status, who are few and far between (where are all the good men???).   As a consequence, we see an increasing number of frustrated single men and women (now almost 50% of the adult US population). 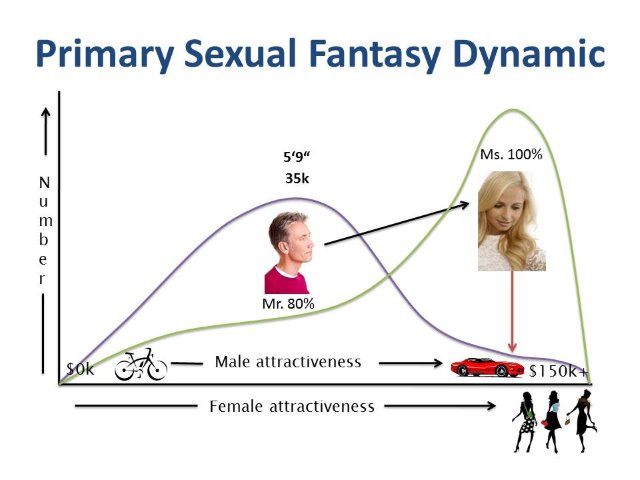 I admit that I was quite upset and frustrated in the past when I was rejected by attractive women because of my average income, low social status and for having children (and if I hear the same from other men).  Now that I understand the difference in our cultural background and the real or perceived necessity for women to be with men in the top income brackets, I no longer get upset.  Instead, I feel compassion, as I know from being a dating coach how hard and frustrating it is for most single women to find/attract and keep a high earning men (if you need more evidence read Marry Him: The Case for Settling for Mr. Good Enough by Lori Gottlieb or one of the many other books for modern women seeking successful men).

In Integral Relationships: A Manual for Men, this dynamic is further explained and differentiated for men and women at different stages of consciousness development, so this broad outline can only provide a generalizing orientation.  There are also exceptions where women have indeed chosen to marry down or to “buy a husband”.