Our social responsibility to be in healthy love relationships 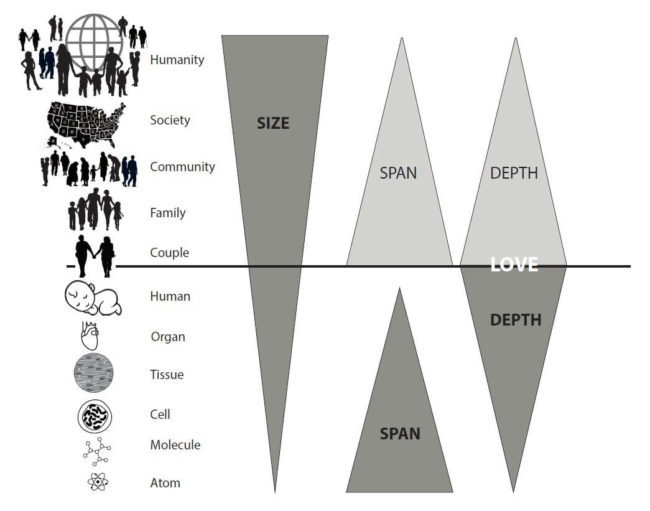 In the past 15 years, I have been arguing that if we want to create a sane, loving, peaceful, and sustainable world, we need to first learn how to co-create a peaceful and sustainable love relationship with one person, and then expand from there.

It escapes me why an increasing number of people (including many sociologists, integral thinkers, and spiritual teachers) think that humanity either consists of individuals who create societies (called social atomism) or societies who form our collective human thinking and being (called societies as macro-subjects). These views ignore or deny the importance of functional "social holons" that consist of loving couples in healthy sustainable relationships who co-create functional (nuclear) families as the foundation for thriving communities, flourishing societies, and peaceful and caring humanity as shown in the image below.

The main reason for the increasing number of broken families, singles, and declining birthrates at advanced levels of consciousness is the widespread modern and postmodern view that humans are independently thinking and acting subjects, and that their relations create communities and societies. This view of society is called social atomism. It supplanted the more traditional view of society as a macro-subject, i.e. the view that humans are "social animals," as put forward by David Brooks in his book with the same title, or that we are "relational beings" as argued for by Kenneth Gergen. These proponents of society as a macro subject maintain that human behavior is not independent, but largely conditioned by society and the unconscious. James Gordon Finlayson explains the difference between the two theories in the book Habermas: A Very Short Introduction as follows.

Social atomism: the idea, common to much social and political philosophy, that individual subjects are logically, ontologically, and explanatorily prior to social, political, or ethical reality. On this view, the community consists of the sum of, or relations between, discrete, fully constituted, pre-social, pre-political subjects. The essential point of social atomism is that while individual subjects are not constituted by their relations with one another or with society as a whole, society or community is constituted by relations between individual subjects. This has the consequence that community is not seen as bearing any intrinsic value, and that membership within it is not seen as intrinsically valuable. Rather the community exists in order to serve the pre-existing interests and desires of individual subjects, and membership in the community is only ever instrumentally valuable.
Society as macro-subject: the idea that society is a kind of macro-subject can be found in Plato, Rousseau, Schiller, Hegel, Marx and Durkheim. The idea is that society is a unitary organic whole; not just a plurality or aggregate of individuals, but a kind of collective person.

To Habermas, "Society is neither an aggregate of discrete individual subjects, nor an organic unity, in which the parts subserve the end of the whole. Not only is the social not, as he says, a macro-subject, it is not even unitary or uniform. It is a complex and multifarious intersubjective structure, comprising distinct overlapping spheres, within which individual agents interact. The social world is as much 'in' us, in the way we think, feel and act, as much as we are 'in' it."
For him, society consists of the "Lebenswelt (literally, "lifeworld") or "living environment" of couples, family and households, community, workplace, and voluntary organizations (the Lower Left "we" quadrant in Integral theory, if you will), out of which impersonal, and increasingly invisible social and political "systems" of power and money emerge (Lower Right quadrant) which regulate the production and circulation of goods and services, and thus provide an integrating effect by coordinating the actions of individuals. Functioning societies consist in a fragile equilibrium of the lifeworld and the systems.
This equilibrium gets out of balance when love relationships and families fall apart, individual freedoms are confronted with societal structures and order, and when the system, which is embedded in, and depends on the lifeworld for its existence, encroaches upon, colonizes, displaces and even destroys the lifeworld.
The resulting five "pathologies" are:

1. Decrease in shared meanings and mutual understandings.
2. Erosion of social bonds (disintegration of communities.)
3. Increase in people´s feelings of helplessness and lack of belonging.
4. The consequent unwillingness of people to take responsibility for their actions and for social phenomena.
5. Destabilization and breakdown of social order and stability.

Because "the system" depends on a functioning lifeworld, such as couples, healthy nuclear families, and stable communities, the above pathologies eventually give rise to instability and crises of the system itself. We already see the effects throughout the world in dysfunctional governments, impersonal shareholder-value driven corporations, the growing military-industrial complex, increasingly unmanageable social security and healthcare systems, crumbling infrastructures, and the vulnerability of the internet and social media to hackers, to name a few.
The misconception that humans are isolated, individual "social atoms," or unique or authentic selves instead of relational beings in social holarchies, leads to many of the challenges in the private and public spheres that I cover in my book Sex Purpose Love and underscores the necessity for couples who co-create and procreate in healthy love relationships. 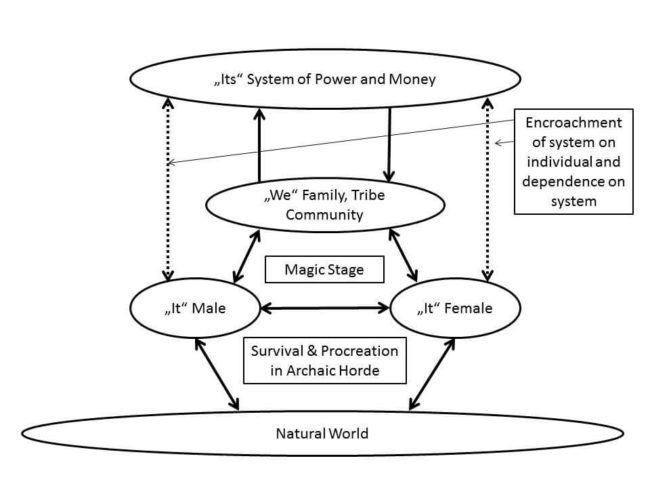