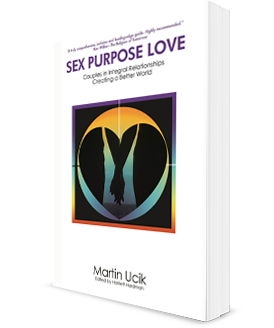 Sex Purpose Love addresses the complexity of love relationships in the 21st century and the importance of healthy sustainable love relationships to solve the global challenges that humanity is facing. It applies Ken Wilber s Integral theory of human growth and potentials to the areas of sex, purpose, love, and couples creating a better world.
Part 1 about the Sexes outlines how singles and couples can co-create healthy Integral relationships by meeting each other at their level of development (e.g. consciousness, spirituality, sexuality and anima/animus complex), and learn, heal, grow, and awaken together.
Part 2 about Purpose shows how individuals can identify and then share their life’s purpose with an equal and opposite partner to co-create a healthy lifelong Integral relationship that serves the greatest good for the largest number of people and thus makes the world a better place.
Part 3 about Love provides a new Integral vision for love between partners at the level of all seven Chakras (material, sexual, power, emotional, creativity, wisdom, and unity) and even more so for what is uniquely co-created between them.
Part 4 about Creating a Better World provides data and good reasons why couples with children in healthy lifelong Integral love relationships are better off than singles, and essential for creating a better world and future in which everyone can flourish.

The Four Components the ILR Model

Below is a broad outline of the four major components, of the ILR model.

The first big component of the ILR model relates to sex. The battle of the sexes and the challenges of creating mutually beneficial and harmonious sexual relationships between men and women are probably as old as human existence. Scores of relationship experts have offered their advice, sometimes based on their own experiences, sometimes based on research. Alas, the more we learn and evolve, the more we seem to struggle to co-create healthy love relationships. As a consequence, the number of divorces and singles is on the rise around the world. The application of Ken Wilber’s Integral theory of human growth and potentials to love relationships provides us with the necessary insights and tools for ending the battle between the sexes and for creating healthy love relationships.

It is important to note that people from all walks of life and levels of education or consciousness can learn about and apply the Integral Love Relationship model.

In the table below are the major elements of the Sex component of the ILR model:

On line one in the table above you see that the biggest factors in our sexual selection process are the Primary sexual fantasies (women desiring success-objects and males desiring (younger) sex-objects), and the fear-shame dynamic (females selecting males who provide and protect, and males competing for females who appreciate and reward them with sex and love.) It is still shocking how few people are consciously aware of these underlying dynamics of our sexual selection process and its negative effects of their excessive forms on our love relationships and the world at large. In addition to these two primary sexual selection criteria, most people desire Secondary fantasies such as a shared interior resonance or intimacy, cultural compatibility, and social desirability to be met. Lovers usually describe the ensuing feelings when their fantasies are fulfilled as chemistry between them. In our modern world, the expectations of most women, but also of some men, are increasingly unrealistic when it comes to sexual selection. Most singles desire partners who are above average in looks, status and money, even if they themselves are average or below average.

Line two indicates that we need to become realistic about our in regards to our Primary Fantasy and not date outside our league, and rather focus on a shared purpose as described in Part 2, if we want to be in a healthy sustainable love relationship.

Line three shows the importance of understanding the difference between healthy and unhealthy masculine and feminine polarities, and how to balance and harmonize these polarities for creating attraction (like the opposing poles of two magnets) and synergy in a love relationship.

Line four shows the lesser known but equally important needs for compatibility in levels of development in the areas of consciousness, sexuality, spirituality and anima/animus complex.

Line five points to the importance of ongoing learning, healing, growing, and awakening with a partner to keep our love relationships healthy and thriving.

Line six indicates the importance of understanding personality types, as well as being aware of various personality disorders and unhealthy attachment styles that will sabotage any relationship.

This brings us to line 7 of forming a healthy Integral sexual relationship.

The second big component of the ILR model relates to purpose. If you ask people what they are most concerned and passionate about, or what the meaning of life and their own purpose is, you often get a blank stare, or at best, basic or general answers such as being there for my kids, enjoying life, or living life to the fullest. Few people know that having a deeper sense of purpose that serves the needs of others leads to happier, healthier and longer lives, and that sharing a greater purpose with a partner is key for long-term relationship success.

The table below shows the major ILR purpose elements:

Line one shows that we have a Biological Purpose to survive, form groups, procreate, and seek the best quality-of-life possible, all of which unfolds naturally as we mature. We also have a Transcendental Purpose of creating more goodness, truth, beauty, or function that make the world a better place.

Line two shows that, even though we all have a Transcendental Purpose, most people need to awaken to it first in order to consciously live it.

Line three shows that our Transcendental Purpose is rooted in four genetically predispositioned natural talents for empathy, intelligence, creativity and kinesthetic abilities that vary in kind and degree between people.

Line four shows that these four natural talents lead to skill development that allows us to create more goodness, truth, beauty, or functioning in the world.

Line five shows that sharing our Transcendental Purpose with a partner is essential for its healthy expression and for having the greatest impact by creating synergy where the whole becomes larger than the sum of the parts (and is way more fun too!!)

The third major component of the ILR model is love. Most people have experienced love but can’t put clear words to what romantic love actually is and how to experience it. Many love songs attest to it, such as “I want to know what love is” by Foreigner, or “I really don’t know love at all” by Joni Mitchell. We know love when we see or feel it, for example as shown in the movie “Love Actually”, but proactively creating love seems hard or impossible, and so lasting romantic love remains somewhat of a mystery and elusive for many. In Part 3 of the book we will demystify what human love is. This will allow us to develop a model for love as an active choice that is healthy and sustainable, and not just something that we seek, attract, fall into, or that happens to us. Below are the major components:

Line one shows traditional love that is experienced when different needs and desires of males and females are satisfied.

Line two shows that the fulfillment of these desires leads to conditional, transactional, asymmetrical love relationships.

Line three shows that these love relationships often turn into master-slave relationships. In modern or postmodern relationships, this usually leads to breakups and divorces. These separations are then often followed by prolonged singlehood or serial dating, or by multiple consecutive relationships and marriages. Some relationship experts now even call it the new normal. But this is destructive and does not have to be so!

Line four shows the alternative; not only loving your partner, but even more so loving what is uniquely co-created by choice between couples with equal rights and responsibilities at the level of all seven chakras.

Line five indicates that this leads to lasting Transcendental Love based on a shared Transcendental Purpose in lifelong healthy Integral love relationships.

The last major component of the ILR model shows why co-creation and procreation in Integral love relationships matter for making the world a better place and for a sustainable future for humanity. Most people today either see society as the sum of independently thinking and acting individuals, or alternatively as a holistic macro organism (we are all one) or social system that individual humans are controlled and governed by. In either case, people in modern and postmodern societies tend to assign the highest value or priority to individuals. In contrast, the ILR model maintains that we are “relational beings” and that being in healthy love relationship is essential for becoming fully human (at the level of all seven chakras in all four quadrants by balancing and harmonizing feminine and masculine polarities) and fundamental for creating functional families as parts of thriving communities and a world in which everyone can flourish. Below are the major elements:

Line one shows that in order to make the world a better place, we need to become aware of the major global challenges that humanity is facing, and how these problems were created in the first place through our sexual selection process.

Line two shows that Integral love relationships are essential or primal for becoming fully human, and for addressing the major global challenges that humanity is facing.

Line three shows that finding a mutual understanding and agreement with a partner about what is right, true, beautiful, and functioning in a given situation are crucial for a thriving relationship and making a positive difference.

Line five shows the importance of taking appropriate actions once consensus is reached between couples through communication that applies discourse ethics. This process is therefore called communicative action, as talk is cheap, but action taken before thinking and feeling things through on the level of the couple and reaching mutual understanding and agreement often leads to more misunderstandings, conflict, chaos, and problems.