Value 2: Love relationships as an indicator of our psychological health and spiritual realization 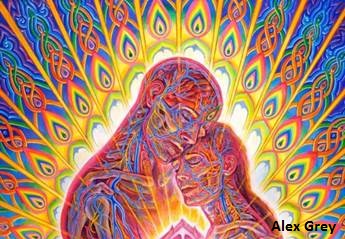 #2 of 12 Values for Integral Relationship Evolutionaries:
"We see the depth of our heart and soul connection as well as the level of humility and devotion to our relationship as an indicator of our psychological health and spiritual realization."

With heart connection I mean our ability to emotionally attune and feel into our partner with care, empathy and compassion. Developing emotional health, intelligence, literacy, and intimacy are an essential part of integral relationships. Recent research at UC Davis confirms that lovers cannot only experience what their partners feel, but also that their heart rate and breathing gets into sync when they are connecting. Through this heart connection (and physical touch), the love and bonding hormone Oxytocin, with its stress-reducing, healing and well-being benefits, is released. This may be one of the reasons why couples are on average healthier and live longer than singles.

With soul I mean the sense of an authentic self that remains after we strip away all learned conceptions and false beliefs about who we are. In Love and Awakening: Discovering the Sacred Path of Intimate Relationship, John Welwood describes on page 50 the unique connection that soul-mates (which he calls worthy opponents) experience as "the opening of a further dimension--seeing and loving each other for who they could become under each other's influence." Soul-mates are divinely appointed to support each others awakening; not only for their own, but for their partners and larger societies benefits.

Humility, the virtue of lowering one self in relation to others, has mostly become a negative value in modern and postmodern cultures, as well as spiritual circles that put individual self-actualization and enlightenment front and center. This often leads to (new-age) narcissism, hubris, arrogance, pride and a sense of entitlement. Humility, however, is essential for an integral love relationship in which we have realistic expectations and are open to receiving feedback from our partner that leads to curiosity, healing through shadow work, learning, growing, awakening and true co-creation. Integral lovers understand that meditation does not get to the shadow, that no one is at the highest level in all developmental lines, and that integrating basic capacities and transcending limited views at each level of consciousness is a lifelong process that is best achieved in intimate relationships and marriage.*

Similarly to humility, devotion, the virtue of selfless affection and dedication, has become a negative concept in our hyper-individualized "me-me-me" culture. Integral couples are devoted to nurturing their relationship in the we-space. Focusing on the relationship is very different from being devoted to a partner only, as it leads to ongoing healing, growth and contribution in the safe container of a committed partnership, instead of an imbalance or asymmetry of give and take, manipulation, threats, power struggles, stagnation, co-dependence, regression and painful breakups. 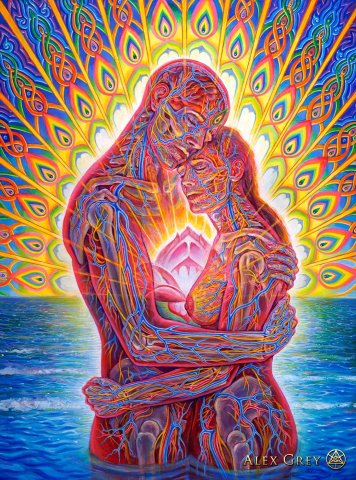 The World Health Organization defines psychological health as "a state of well-being in which the individual realizes his or her own abilities, can cope with the normal stresses of life, can work productively and fruitfully, and is able to make a contribution to his or her community."

With spiritual realization I mean our ability to witness material objects, including our body, and objects in consciousness such as thoughts and feelings as such, and to stay present with, and surrender to what is in the present moment without attachment or rejection.

Practically all psychologists and western spiritual teachers maintain that our ability of being in a loving, committed relationship--or working/opening towards it--is an indicator of our psychological health and spiritual realization, while the opposite is seen as dysfunction and Spiritual Bypassing (see book by Robert Augustus Masters).

*Roger Walsh said in a conversation with Ken Wilber:
"Relationships dedicated to growth constitute one of the best bulwarks against stagnation. Growth-oriented relationships provide us with honest feedback to compensate for our blind spots. Relationships aimed at recognizing and releasing psychological, spiritual and developmental limitations are invaluable. There are many forms of relationships, however, perhaps the supreme method for obtaining second person feedback are intimate relationships and marriage." (PDF page 4).

Robert Augustus Masters writes in Transformation through Intimacy: The Journey Towards Mature Monogamy (now revised as Awakened Monogamy):
"The passage from immature to mature monogamy is not just a journey of ripening intimacy with a beloved other, but also a journey into and through zones of ourselves that may be quite difficult to navigate, let alone get intimate with and integrate with the rest of our being. But however much this passage might ask of us, it gives back even more, transforming us until we are established in the unshakable love, profound passion, and radically intimate mutuality that epitomize mature monogamy. And even if we don't end up in such a relationship, our having taken the journey toward it will immeasurably benefit us in whatever we do."

Zen teacher Adyashanti said after facilitating a couples retreat with his wife in which he realized how many "spiritual" people struggle in their relationships:
"The proof of the depth and embodiment of your realization will be seen in your love relationship. That's where the proof is in the pudding. If it all collapses in your relationship, you have some work to do. And people do have a lot of difficulties in their relationships."

Polly Young Eisendrath and Florence Wiedemann write in Female Authority: Empowering Women Through Psychotherapy (another excellent book) on page 222-223:
"Thus we claim that [healthy] personality is always a tandem development of self-other conceptions and never a discovery of an independent self. The fallacy of individualism, a misleading notion that we are separate units contained in private bodies like machines in little houses, leads to endless confusion about human relationship and a general repression of dependence and vulnerability. We have encountered many people--especially women--who literally believe that living alone is a condition of psychological independence. In other words, they have confused personal agency (choice, etc.) with the social condition of living alone. The idea of "living alone" is, itself, a distortion based on misconceptions about privacy because people never live alone. As organisms, we have a variety of both biological and psychological needs that prevent us from being able to survive in isolation."

Eckhart Tolle writes in The Power Of Now on page 127 (153 paperback):
"Avoidance of relationships in an attempt to avoid pain is not the answer either. The pain is there anyway. Three failed relationships in as many years are more likely to force you into awakening then three years on a desert island shut away in your room."