Why do couples argue and get into fights, and why are singles single?

There are many reasons why couples argue, get into fights and end their relationships, and why singles can’t find a partner or avoid relationships altogether:

In most cases, these and similar problems can be solved through better “translation” (communication/understanding/behavior/psychological health etc.) with the help of appropriate books, workshops or relationship professionals if both partners are at the same level of consciousness. Otherwise their relationships are basically doomed — sorry.

Why is that?
Because couples who are at different levels of first-tier consciousness have fundamentally different values, concerns, meaning-making structures and world-views that collide. Their differences could only be overcome through “transformation” (not to be confused with “translation” above – which is often seen as “transformation”) by the partner at the earlier level of consciousness. This is often unrealistic, since “transformation” requires serious efforts over an extended period of time (sometimes years, with a breakdown of the old structures) while the more evolved partner may continue to grow as well.

Below is a very short outline of the eight stages/levels of consciousness that the Integral (Relationship) Model uses. A different color of the rainbow is assigned to each stage to deflect from ranking or labeling individuals, and to avoid confusion between the various numbers and names of the multitude of developmental systems (see appendix of Integral Psychology by Ken Wilber for the latter).

Post-conventional:
6. Green is the pluralistic “sensitive or indifferent” stage with a focus on holism, compassion, idealism, and involvement.

Second-Tier
Post-post-conventional:
7. Teal is the integral “integrated or partial” stage with a focus on multiple perspectives and the process of development itself.
8. Turquoise represents the transpersonal and all higher “wisdom and compassion” stages with a focus on full embodiment and embrace.

Very generally speaking, we can say that individuals who are fully actualized at their level of consciousness are most compatible with partners who are at the same level of consciousness, as indicated by the shaded fields in the matrix below, as long as they effectively deal with the unique conflicts that arise at their particular stage through better “translation”. Individuals who are in transition from one stage to the next will be attracted to partners at the level they are transitioning into. Irresolvable conflicts arise between first-tier partners who are one level apart and each fully actualized at their altitude. Green fights Orange, which most vehemently rejects Amber, which is utterly frustrated by Red. 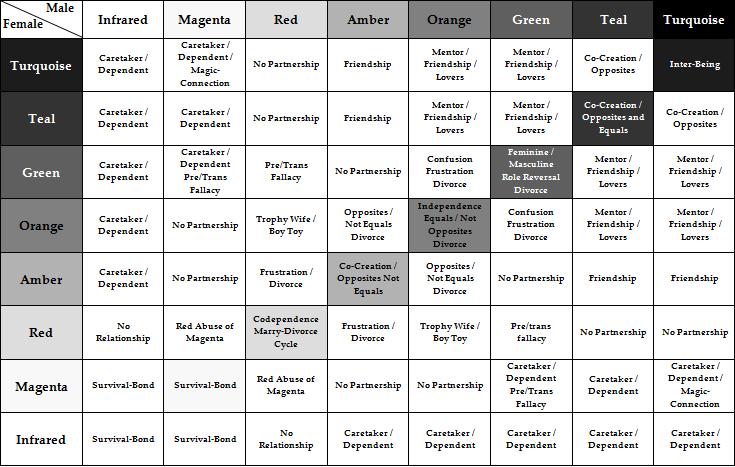 Click on the image above to go to interactive matrix by David Fonsbo, Denmark

Male/Female difference in growth:
Males in first-tier consciousness tend to grow like the banks of a river by transcending and excluding the limited views of earlier stages and remaining at the highest altitude they have reached. Females in first-tier consciousness tend to rise and fall unconsciously like the water levels of a river by transcending and including basic capacities of earlier stages. Therefore, women often only feel met at the highest level that they share with their partner while meeting their other needs outside the relationship or getting frustrated.

In an Integral Relationship (see previous newsletter here), the couple is aware about stages of development in multiple lines and how to balance and harmonize healthy feminine and masculine polarities in the four quadrants at the level of all seven chakras. They can then make an explicit agreement to heal, learn and grow together to serve the highest good for the largest number of people.

To say it with Rumi:
It’s the old rule that drunks have to argue and get into fights.
The lover is just as bad.
He falls into a hole.
But down in that hole he finds something shining, worth more than any amount of money or power.

Last night the moon came dropping its clothes in the street.
I took it as a sign to start singing, falling up into the bowl of sky.
The bowl breaks.
Everywhere is falling everywhere.
Nothing else to do.

Here’s the new rule: break the wineglass,
and fall toward the glassblower’s breath.

Inside this new love, die.
Your way begins on the other side.
Become the sky.
Take an axe to the prison wall.
Escape.
Walk out like someone suddenly born into color.
Do it now.
Your covered with thick cloud.
Slide out the side.

Die, and be quiet.
Quietness is the surest sign that you’ve died.
Your old life was a frantic running from silence.
The speechless full moon comes out now.

I used to want buyers for my words.
Now I wish someone would buy me away from words.

I’ve made a lot of charmingly profound images,
scenes with Abraham, and Abraham’s father, Azar,
who was also famous for icons.

I’m so tired of what I’ve been doing.

Then one image without form came, and I quit.

Look for someone else to tend the shop.
I’m out of the image-making business.

Finally I know the freedom of madness.

A random image arrives. I scream, “Get out!” It disintegrates.

Only love.
Only the holder the flag fits into, and wind. No flag.