Why Families Matter for a Better World 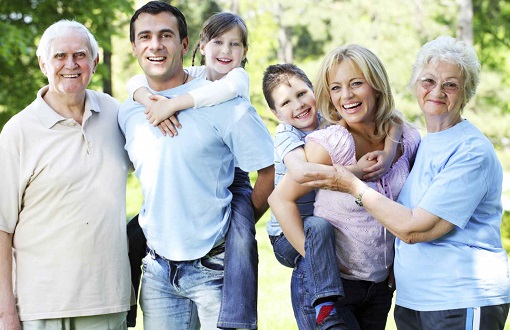 Watch the replay of our Web Jam about this topic at www.youtube.com/watch?v=UuG8CADp9V0&t=749s

To understand why families matter for functioning communities and a better word, we need to take a closer look at human history and modern societies.
In the image below we see that self-conscious humans emerged out of the natural world after they formed exclusive sexual pair bonds. Out of these pair-bonds, nuclear families emerged who formed tribes and later communities–what Jürgen Habermas calls the lifeworld. Out of the lifeworld, impersonal and increasingly invisible social and political “systems” of power and money emerged which regulated the production and circulation of goods and services, and thus provided an integrating effect by coordinating the actions of individuals.
Functioning societies consist in a fragile equilibrium of the lifeworld (functional families and communities) and the systems who serve them as shown below. 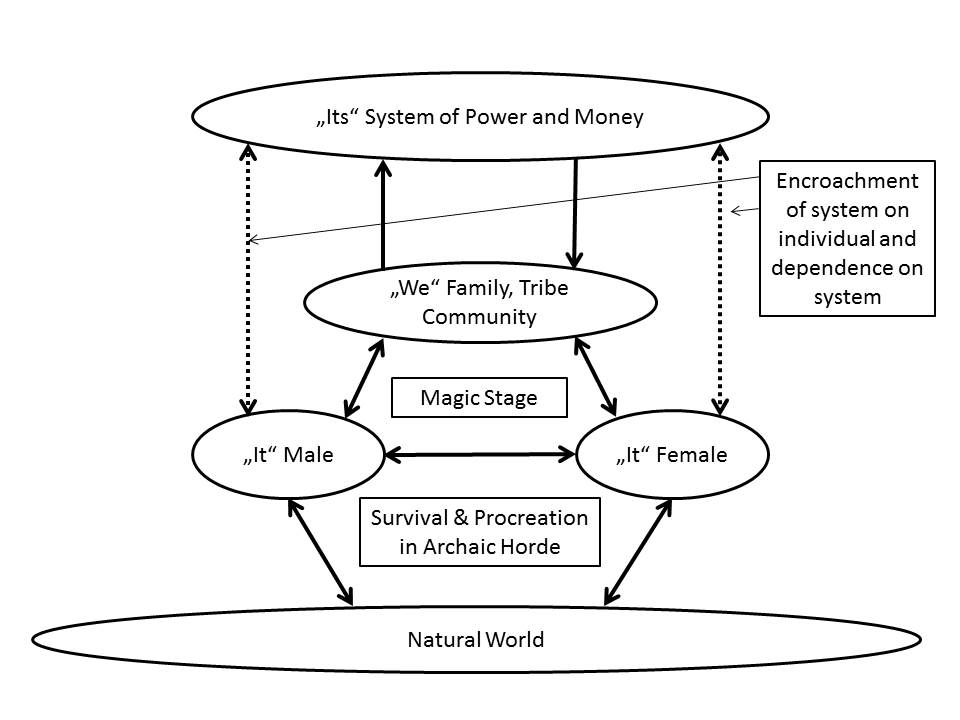 According to Habermas, this equilibrium gets out of balance when love relationships and families fall apart, individual freedoms are confronted with societal structures and order, and when the system, which is embedded in, and depends on the lifeworld for its existence, encroaches upon, colonizes, displaces and even destroys the lifeworld.
The resulting five “pathologies” are:

Because the system depends on a functioning lifeworld, such as couples, healthy nuclear families, and stable communities, the above pathologies eventually give rise to instability and crises of the system itself. We already see the effects throughout the world in dysfunctional governments, impersonal shareholder-value driven corporations, the growing military-industrial complex, increasingly unmanageable social security and healthcare systems, crumbling infrastructures, and the vulnerability of the internet and social media to hackers, just to name a few.

Professor Fellmann points out in his excellent book “the couple” that the private sphere of marriage, family and community provides a sanctuary for spouses and children when they return home from the public sphere. This sacred private space becomes a bulwark against direct exposure to and dependence on the system, protects against the instrumentalization of individuals, creates a safeguard against using people as means, and provides an insurance against the encroachment of the system on couples and their children’s private sphere.

Why it is important for modern and postmodern couples to raise children in healthy families becomes clear in the chart below.
On the right side we see the approximate percentage of people at each level in today’s western societies. At the bottom we see the timeline of the emergence of each stage. The seven curves indicate the emergence and trajectory of each level throughout human history. When a critical mass of 10% in each emerging stage was reached, the innovations “trickled down” to people at previous stages, and overall populations in that stage (and previous stages who benefited) grew. 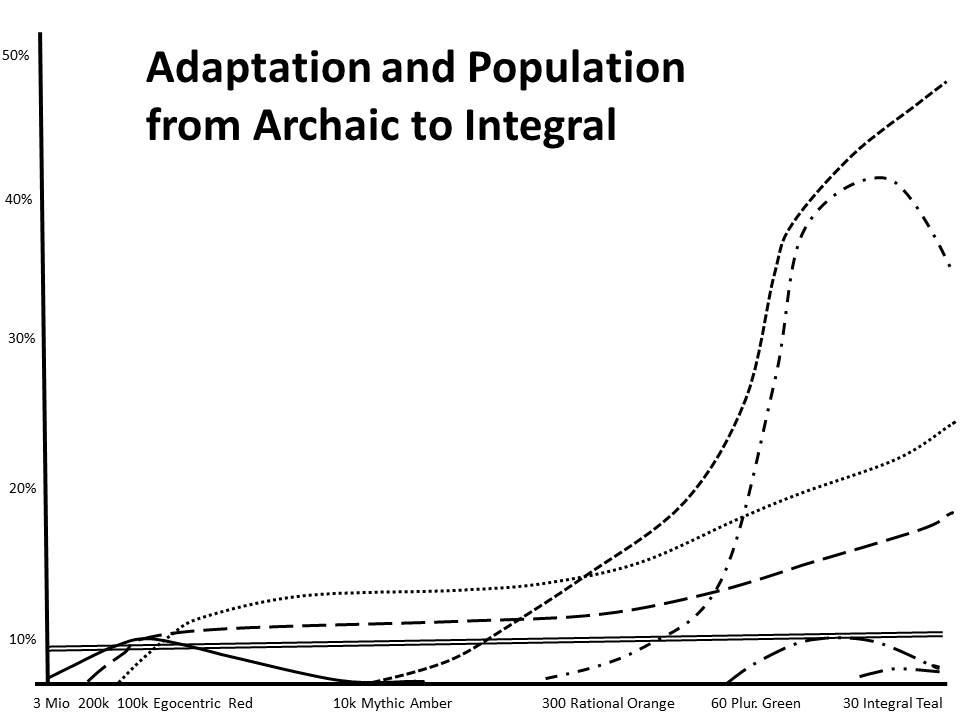 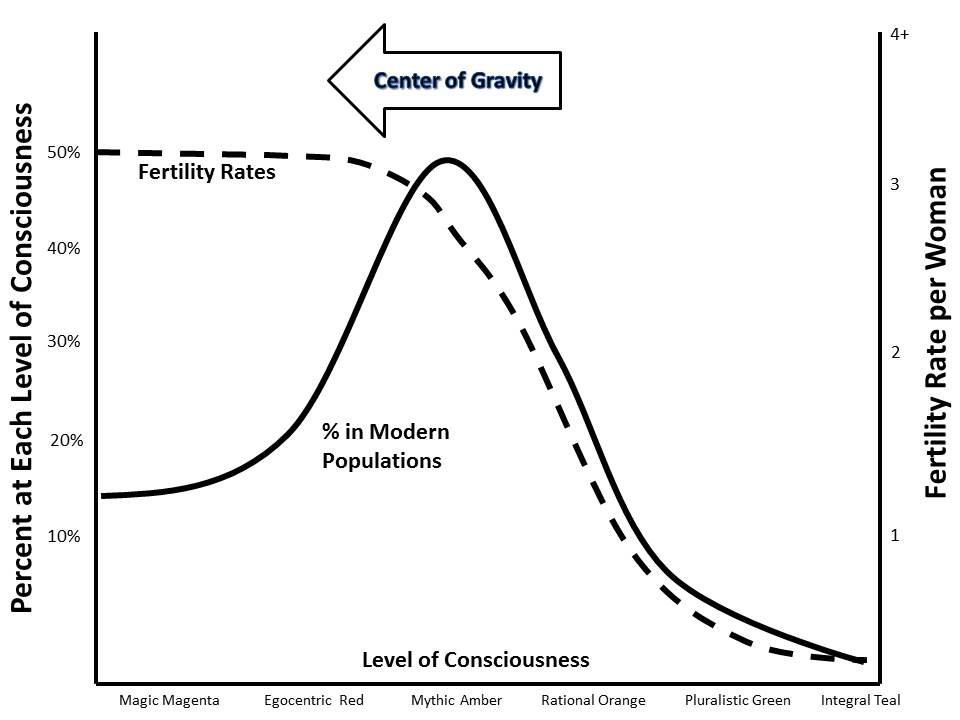 The misconception that humans are isolated, individual “social atoms,” or “unique” or “authentic” selves that can form thriving communities and societies, instead of seeing that we are relational beings who naturally form(ed) holarchies of couples and families (see previous blog), leads to many of the challenges in the private and public spheres that humanity is facing and underscores the necessity for couples who co-create and procreate in healthy love relationships.
Read more in Sex Purpose Love Chapter 18, page 403-447.

* Habermas explains these dialectical dynamics in Communication and the Evolution of Society as follows:

Evolutionarily important innovations mean not only a new level of learning but a new problem situation as well, that is, a new category of burden that accompanies the new social formation. The dialectic of progress can be seen in the fact that with the acquisition of problem-solving abilities, new problem situations come into consciousness. A higher stage of development of productive forces and social integration does bring relief from the problems of the superseded social formation. But the problems that arise at the new stage of development—insofar as they are at all comparable with the old one—increase in intensity.[i]

[i] Communication and the Evolution of Society page 164.